Eximius A Great Hit In The Asia GAME Festival 2018 Matchroom’s venture into the Asia GAME Festival with Eximius had achieved rather stunning success over the last 2 days. Our promoters hard at work bringing Eximius to the crowd

Our initial goal was to just create awareness given that the game is still in its initial stages, so we weren’t expecting it when such a crowd formed around the booth. 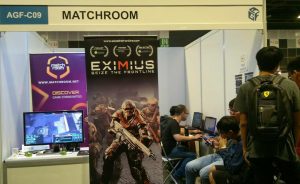 The high score programme even had the same people coming back for more; checking if their record has been broken or trying to beat the reigning champions. It’s not only guys who want to play!

It was cool to see guys and girls alike taking an interest in the game; but I think the highlight of the day was when Anthony Kang, the founder of the Asia GAME Festival (who also founded the Anime Festival Asia while he was the President of Dentsu).

This is just the start for both Matchroom and Eximius so please stay tuned for more great stuff!

Feel free to check out the news on Matchroom News